skip to main | skip to sidebar

All I Want for Christmas is....

Definitely.  But, this is not what this blog is about.

I have many favorite Christmas songs..... but, again, that is not what this post is about.

"All I Want for Christmas is You."

Ugh ~ I think it is a combination of being OVER-PLAYED and the vision of Mariah being a silly caricature of herself in the inappropriate costume.

But, anyway....I have found a way to not only tolerate it, but embrace it.

Now, all the lyrics aren't quite symbiotic to my point....but the overall focus is now changed.

Yes, I already have Him.  I asked Him to be my Savior almost forty years ago,  I have a relationship with Him and He resides in me.  However, so does my SELF, and as Princess Diana once stated:  "It is a bit crowded."
So, LESS of me, and MORE of JESUS.

The irony of Christmas in today's culture is that we give EVERYONE else gifts, except the BIRTHDAY BOY...the PERSON whose birthday it really is and for whom we supposedly celebrate.

So, what would a good Christmas gift for JESUS be?

After all, He left His throne, broke through the glory of heaven to come to earth, humbly and earnestly ~ to die a horrific, torturous death because He wants a relationship with you NOW and for all eternity.

Won't you give Him the gift of yourself?

Visit here for giving and receiving the GREATEST GIFT of all!

I found this cute youtube version of the song.  I don't know these girls....but, how refreshing.
(You can stop at around four minutes....somewhat redundant and don't want to waste your time.)

Blessed gift giving and receiving!
Posted by Becky at 11:26 AM 1 comments

"I Heard the Bells on Christmas Day"

Generally speaking, we all know the first verse of the Christmas carol, "I Heard the Bells on Christmas Day... 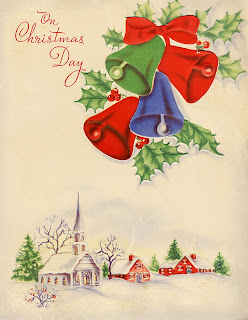 .....their old familiar carols play.
And wild and sweet the words repeat
Of peace on earth, good will toward men.

And that's about it, right?

The first verse evokes images of a time long ago.....a sweet, simpler time when the true meaning of Christmas would indeed ring out and could be embraced and enjoyed with intentional pertinence.

However, the back story behind this well-known song is a poignant expression of what many of us face ~ the immense pain that comes with living in a fallen world, and melding it with the hope and joy of the coming of our Savior and King.  The tension between sorrow and happiness.

First of all.....the lyrics were written by Henry Wadsworth Longfellow.  Who knew?

In 1861, the famous poet experienced what we would call in today's vernacular, "a very bad year"  ~ the nation went to war, brother against brother, and his beloved wife died tragically. This is a recounting of the incident:

The day before the accident, Fanny Longfellow recorded in her journal: "We are all sighing for the good sea breeze instead of this stifling land one filled with dust. Poor Allegra is very droopy with heat, and Edie has to get her hair in a net to free her neck from the weight." After trimming some of seven year old Edith's beautiful curls, Fanny decided to preserve the clippings in sealing wax. Melting a bar of sealing wax with a candle, a few drops fell unnoticed upon her dress. The longed for sea breeze gusted through the window, igniting the light material of Fanny's dress-- immediately wrapping her in flames. In her attempt to protect Edith and Allegra, she ran to Henry's study in the next room, where Henry frantically attempted to extinguish the flames with a nearby, but undersized throw rug. Failing to stop the fire with the rug, he tried to smother the flames by throwing his arms around Frances-- severely burning his face, arms, and hands. Fanny Longfellow died the next morning. Too ill from his burns and grief, Henry did not attend her funeral. (Incidentally, the trademark full beard of Henry Wadsworth Longfellow arose from his inability to shave after this tragedy.)

His journal entries mirrored his grief:

Christmas 1861 ~ "How inexpressibly sad are all holidays.  I can make no record of these days.  Better leaven them wrapped in silence.  Perhaps someday God will give me peace."

Almost a year later, Longfellow received word that his oldest son Charles, a lieutenant in the Army of the Potomac, had been severely wounded with a bullet passing under his shoulder blades and taking off one of the spinal processes

I thought how as the day had come
The belfries of all Christendom
Had roll'd along th' unbroken song
Of Peace on earth, good will to men.

And in despair, I bow'd my head:
"There is no peace on earth," I said,
"For hate is strong and mocks the song,
Of Peace on earth, good will to men."

Then from each black, accursed mouth
The cannon thundered in the South,
And with the sound the carols drowned
Of peace on earth, good will to men.

It was as if an earthquake rent
The hearthstones of a continent,
And made forlorn, the households born
Of peace on earth, good will to men.

Then pealed the bells more loud and deep;
"God is not dead, nor doth He sleep;
The wrong shall fail, the right prevail,
With Peace on earth, good will to men."

Hallelujah, just like the psalmist.....out of his despair, he dug deep into his soul, relying not on his feelings, but on the TRUTH of who God is!!!

My soul, wait silently for God alone, for my expectation is from Him. He only is my rock and my salvation; He is my defense; I shall not be moved. In God is my salvation and my glory; The rock of my strength, and my refuge, is in God. Trust in Him at all times, you people; Pour out your heart before Him; God is a refuge for us"  Psalm 62: 5-8

.... ring a joyous sweet song in your soul ~ for HE is AWESOME and so very WORTHY.


My Christmas wish for you, dear friend, no matter your circumstances....God's TRUTH and His profound presence in your spirit......the JOY that is "EMMANUEL, with us," and the HOPE of His glory.

Enjoy this historical hymn with a new rendition and new understanding:

Becky
I am a 50's empty nester who loves the Lord, her family and friends